Indications have been granted on the basis of similarity between HYRIMOZ® and the reference biologic drug, Humira®.1

OFFERING TREATMENT OPTIONS FOR YOU AND YOUR PATIENTS 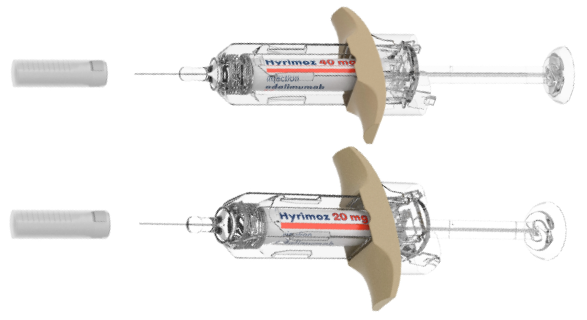 WITH DEMONSTRATED EFFICACY AND SAFETY PROFILE

The ADACCESS switch study met its primary objective – a comparable PASI75 response rate between HYRIMOZ® and the reference adalimumab (EU and US formulations of Humira®) at week 16.1,2

The types, frequency and severity of adverse events were comparable between HYRIMOZ® and the reference adalimumab (Humira®).1

* A phase III, randomized, double-blind, multicentre, comparator-controlled study with treatment switches to rule out any clinically meaningful difference between HYRIMOZ® (N=231) and the reference adalimumab (EU-Humira®, N=44; US-Humira®, N=190) in 465 patients with moderate to severe chronic plaque-type psoriasis (PsO). The primary efficacy endpoint was the PASI75 (defined as a 75% reduction of the PASI) response rate measured at week 16.

SANDOZ: A DIVISION OF NOVARTIS – A DEDICATED PARTNER IN IMMUNOLOGY CARE IN CANADA

* Based on a 1x 40mg adalimumab injection in healthy patients from measured data. 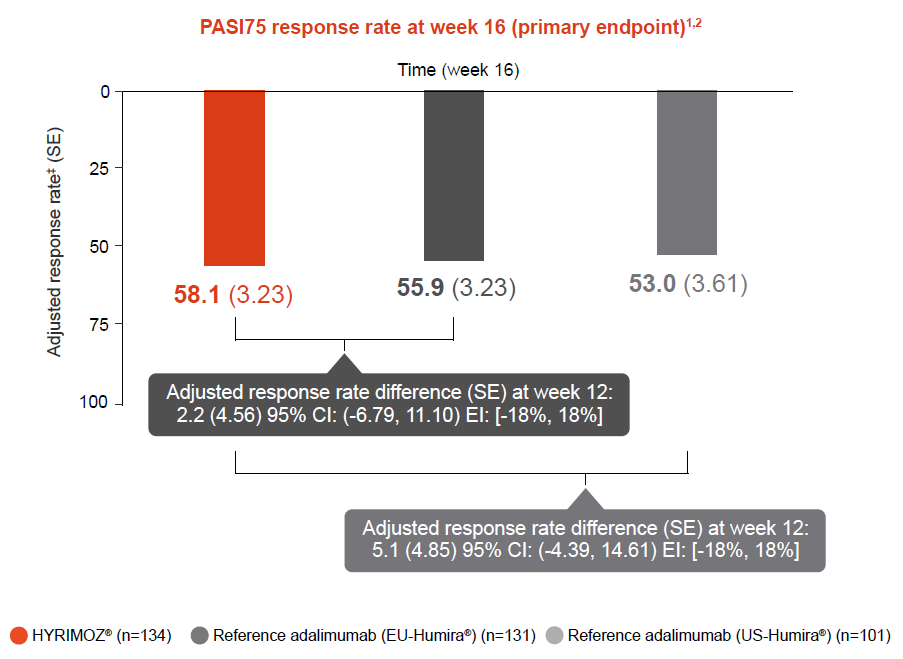 * The patient population consisted of adult male and female patients with active, but clinically stable chronic plaque-type skin psoriasis involving a BSA of at least 10%, a minimal PASI of 12 (indicating moderate-to-severe psoriasis), and an IGA of at least moderate severity (score ≥3). Eligible patients had to have previously received at least one phototherapy or systemic therapy for psoriasis or were candidates to receive such therapy in the opinion of the investigator. Randomization at baseline was stratified by body weight (<90kg and ≥90kg), by prior systemic psoriasis therapy and by region (EU and US).

† In TP1, eligible patients were randomized 1:1 to receive an initial dose of 80 mg subcutaneous HYRIMOZ® or the reference adalimumab (EU or US-Humira®), followed by 40 mg every other week, starting 1 week after the initial dose until week 15. Randomization was stratified by prior systemic therapy, region and body weight, and was performed centrally.

‡ Adjusted response rates were estimated using a logistic regression model including treatment, body weight strata, region and prior systemic therapy. The 95% CI for the rate difference was derived based on the normal approximation and standard error computed using the delta method (method details and code were adopted from Ge et al 2011). Patients with missing PASI scores at week 16 regardless of reason (e.g. missing visit, early discontinuation) are considered non-responders for the analysis.

Indications have been granted on the basis of similarity between HYRIMOZ® and the reference biologic drug Humira®.1

HYRIMOZ®: COMMITTED TO OFFERING FORMAT OPTIONS TO YOU AND YOUR PATIENTS1,3

* Patients may self-inject only if their physician determines that it is appropriate and with medical follow-up, as necessary, after proper training in measurement of the correct dose and injection technique.

HYRIMOZ®: COMMITTED TO PROVIDING STORAGE OPTIONS FOR YOUR PATIENTS1

HYRIMOZ® DOSING FOR INDICATIONS IN RHEUMATOLOGY1

* Available data suggest that the clinical response is usually achieved within 12 weeks of treatment. Continued therapy should be carefully reconsidered in a patient not responding within this time period.

‡ A dose of 10 mg every other week can be considered for patients weighing 10 to <15 kg. A different adalimumab product should be considered as there are no available presentations of HYRIMOZ® capable of delivering 10 mg.

HYRIMOZ® DOSING FOR INDICATIONS IN GASTROENTEROLOGY1

* The use of adalimumab in Crohn’s Disease has been evaluated up to one year in controlled clinical studies. In open-label studies, 510/1,594 patients were evaluated for three years, and 118/1,594 patients for at least five years.

HYRIMOZ® DOSING FOR INDICATIONS IN DERMATOLOGY1

* Antibiotics may be continued during treatment with HYRIMOZ® if necessary.

HYRIMOZ® DOSING FOR INDICATIONS IN OPHTHALMOLOGY1

* HYRIMOZ® can be initiated in combination with corticosteroids and/or other non-biologic immunomodulatory agents. Corticosteroids may be tapered in accordance with clinical practice starting two weeks after initiating treatment with HYRIMOZ®.

† It is recommended that the benefit and risk of continued long-term treatment should be evaluated on a yearly basis.

Patients who miss a dose of HYRIMOZ® should be advised to inject their dose as soon as they remember, then take the next dose at the regular(ly) scheduled time.

The types, frequency and severity of adverse events were comparable between HYRIMOZ® and the reference adalimumab*†

The most serious adverse reactions were:

The most common adverse reaction was injection site reactions.

† 553 patients were exposed to at least one dose of adalimumab and 202 patients completed 10 years of study. Of the 553 patients, 23.0% discontinued due to an adverse event. In total, 49% of patients with adalimumab experienced a serious adverse event; 15.7% were considered at least possibly related to the study drug.

§ Continued groups include patients who continued the same treatment throughout the study.

¶ N’=number of patients with evaluable data/N=number of randomized patients.

†† Overall from Week 1 indicates that patients had at least one ADA positive result (recorded as positive) or had consistently negative results (recorded as negative) post-baseline.